How It All Started

Centuries ago the world’s aristocracy discovered their symbol of justice as adornment for their headpieces – the ostrich feather.

Somewhere in the world, someone must have made money from this fad. Here in the fertile Klein Karoo valley, between the Swartberg and Outeniqua Mountains, people could literally look out their windows at the two-legged dollars, yens, and later, euros.

The ostrich brought a welcomed wealth for the people of the Little Karoo at the end of the 19th century and beginning of the 20th century.

There were the locals, of course, but others came from the ends of the earth. And so came the Jewish community from Russia and Lithuania, with limited possessions but big dreams and tons of energy, to Oudtshoorn, to share in the wealth of the feather.

The downy feather, which curls graciously and so naturally, was to become the heartbeat of a rapidly growing community. Gert Olivier, Angus Lipschitz and the shopkeeper, Max Rose – who will be remembered as the feather king – were but a few of the traders and producers who were to become successful overnight.

Feather barons became land barons. They flourished in ostrich-feather palaces. Typical examples are Pinehurst, Welgeluk, Foste’s Folley, Greylands and the now-defunct Towers. Houses were carefully planned by architects such as Edmeades, and it was a challenge to give each ostrich palace built against the semi-arid Klein Karoo landscape a unique character.

On the Armoed flats stands a beautiful church, erected with the money of one man. The name Armoed, which implied hardship and poverty, was changed to Volmoed after the success brought by the precious ostrich feather. This confirmed the optimism of the residents.

Alongside gold, diamonds and wool, ostrich feathers became South Africa’s chief export product. A government delegation travelled to North Africa and discovered the origin of the most beautiful of beautiful feathers in northern Nigeria and the Sudan. The best 150 ostriches were selected and brought to Cape Town.

The population of Oudtshoorn as well as the ostrich population grew exponentially. From over the mountain basic requirements such as flour, milk, meat and bread were purchased. Feathers were abundant. Water and ostrich feed, however, were depleted. Feather money couldn’t buy water. Major disputes arose over water and the wealth seekers were at each other’s throats.

Every six months around 1kg of feathers was harvested from each ostrich and by 1900 approximately 18 000 ton was exported per year – arriving in London and dispersing from there to Europe and worldwide. In the Little Karoo earnings from ostrich feathers were higher than from any other agricultural product.

By 1903 Henry Ford had built his automobile – without a roof! World War I had started, and stylish hats for women had become irrelevant. Six months into the war, the wealthy started to lose money. There was no longer contact with buyers and the ostrich market disappeared. The industry collapsed.

The feather industry, however, recovered. Veterans tried their best and newcomers joined the industry.  New ostrich-feather palaces sprung up.

In the following years more immigrants flocked to Oudtshoorn in search of wealth. The entire Oudtshoorn community invested their assets in feathers.

The volume of feathers offered on the market overshadowed the limited demand. By 1913, the price of feathers dropped by more than half. Within a year approximately 80% of all role players in the feather industry were bankrupt.

Ostrich leather, or even the use of ostrich meat as a secondary industry, was not yet thought of. In 1916 the industry again was brought to its knees by the biggest drought in history. Feathers remained on the farm and millionaires were back on the street. 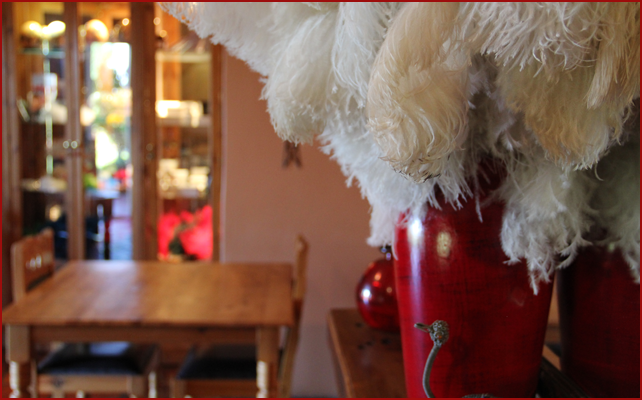