Ostrich eggs are the largest of all eggs, the yolk is the largest single cell that exists today on our planet, though they are actually the smallest eggs relative to the size of the bird.

The nest may contain 15 to 60 eggs, which are on average 15 cm (6 in) long, 13 cm (5 in) wide and weigh 1.4 kg (3 lb). The eggs are incubated by the females by day and the males by night. This uses the colouration of the two sexes to escape detection of the nest, as the drab female blends in with the sand, while the black male is almost undetectable at night. The incubation period is 35 – 45 days.

Modern ostrich farms use incubators to hatch eggs.
For comparison, the smallest bird egg is the humming bird, which would fit 4700 eggs into one ostrich egg. 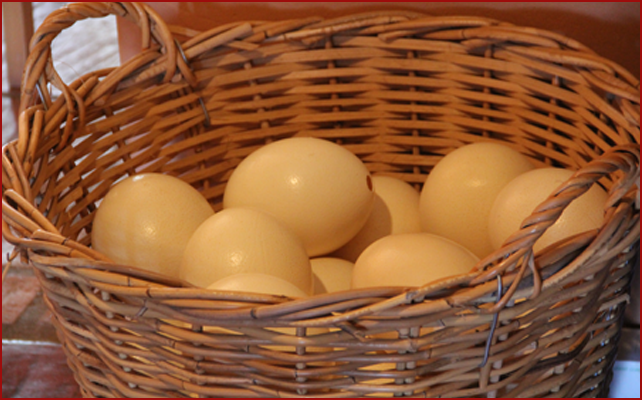